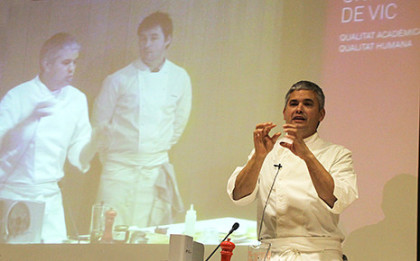 Nandu Jubany, Calldetenes, Catalonia, Spain is an unconditional food-­‐lover, a benchmark in haute cuisine and quality gastronomy, and has received a Michelin star for his restaurant ‘Can Jubany’, in the nearby county of Osona (capital Vic).

He was born in Monistrol of Calders, on January 19th 1971. At the age he entered as the kitchen chef at Urbisol, the family restaurant. Subsequently, he worked in other establishments of prestige and he also spent some time at Juan Mari Arzak’s cuisine, and at the Bodegón’s Alejandro owned by Martín Berasategui.

In this first stage, two Catalan chefs left a notable mark on his life and profession:Carles Gaig, at whose establishment he cooked on his free time and with whom he has a high affinity human and culinary friendship; and Faust Terra, known as Marcel, who gave him the confidence to start the professional career as chef of a gourmet restaurant